I am happy to announce my upcoming book will take place in the Sengoku Period of Japan during Lord Oda Nobunaga's reign. It is an historical fiction with added romance and a little fantasy diced with some paranormal activity. Stay tuned for more announcements. 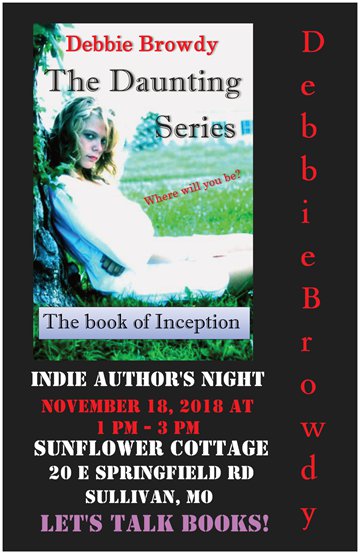 Posted by Debbie Browdy at 8:05 PM

The Daunting Series: The book of Inception

When I stop doing things and allow my mind wander, past Kyle, past Cami, past Toni, past my mom, I remember things. I once lived near the river that cut our country in half. At that time the closest city (or what was left of the Gateway City after the transformation) was what the Ancestors called St. Louis. It was dark, gray, and overrun with buildings that brandished decay, falling to their deaths as the years went by. They should have been torn down, but yet we kept them as if they had a contribution to someone, somewhere. There was nothing pretty here. Streets – that were the backbone of the motion were broken fragments of asphalt taken over by scroungers who were selling their cure to make you forget who you were and the dismal plight you were in. Parks –taken over by decay were nothing more than dirt, grass that had never been mowed, and concrete fragments that used to be statues. What was once there was gone, left for dead and forgotten.